I’ve decided that the next dog we get is going to have short fur.  We’ve had Cocker Spaniels for almost twenty years and they are truly lovable dogs.  But, they need a lot of grooming and I’m ready to retire my clippers and scissors.  I’ve considered a number of breeds.  English Bulldogs and Boston Terriers are at the top of my list and one of those is probably what we’ll get.  But, deep in my heart, the dog that I really want is a Staffordshire Bull Terrier.

Staffies are a small to medium size dog whose heritage dates to the mid-1700’s in England.  The black spot in their history is that they, like many other breeds, were originally bred as a fighting dog.

That ended in the mid-1800’s when England began to enact animal welfare laws that, over time, eliminated not only bull baiting but also dog fighting as a game sport.   By the time that the Staffordshire Bull Terrier was accepted into the kennel club in 1935 the breed had become a loyal, trustworthy and affectionate all purpose companion dog.  The description in the breed standard says it best:

“The breed is naturally muscular and may appear intimidating; however, because of their natural fondness for people, most Staffords are temperamentally ill-suited for guard or attack-dog training. Staffordshire Bull Terrier puppies are very easy to house train.”

In England, Staffies have earned the nickname “The Nanny Dog” because of their inherent love of children.

Unfortunately, I won’t be able to get a Staffie because they’re on my home insurer’s “bad dog hit list.”  Most of the reason for that is because they closely resemble the much larger Pit Bulls and American Staffordshire dogs which are favorites with those sub-humans who think that training a dog to be aggressive and mean is a manly thing to do.   Those cretins are the same ones who, when their poorly raised Pit Bulls get loose and cause a problem, will often describe their dog as a Staffie to avoid extra scrutiny.   The other, less common, factor is that, while they love adults and children, Staffies still have somewhat of a natural tendency to be defensive with strange dogs that they weren’t raised with.  If they aren’t trained and handled properly that can cause issues.  The key point is that, no matter what the breed, it all comes down to training and how a dog is treated.

So, despite wanting a Staffie, I won’t be getting a real one.  As an alternative, I’d like you to meet Rufus, my virtual Staffie.

Rufus is smart for his age and has absolutely no reluctance to share thoughts of his own or thoughts that he he picks up in his travels.

From time to time I’m going to share some of his musings with you and there’s no better time to start than today. 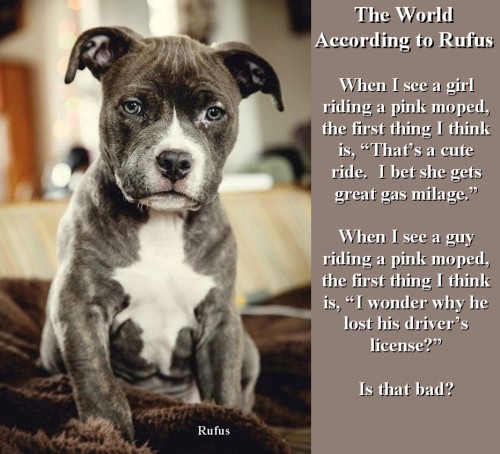 And, lest you think that Rufus always goes for the laugh. 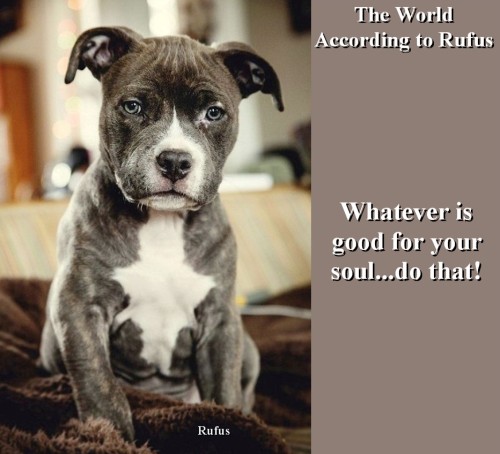 Spring is here.  Enjoy the mild weather and don’t get too excited about the lawn.  Cutting the grass can wait at  least one more day.

6 responses to “Rufus, The Canine Philosopher”