Even a Dog Likes to Look Good

I took Friday off last week and had a long weekend.  That sounds great until you realize that, unless you have special plans for the weekend, the extra day just means another twenty-four hours that will be used to catch up on things that need done around the house.

Friday was spent doing yard work, working on a computer and fixing the dishwasher.  I was going to write about the dishwasher today, but the wounds, mental and physical, are still healing, so that story will have to wait for another time.  Instead, I’m going to tell you about my adventures with Sadie, our Cocker Spaniel.  Saturday morning was “give Sadie a haircut” day.  That’s always a special time.

I firmly believe that most Cocker Spaniels are either female or metrosexual.  They all seem to revel in a day at the groomers, especially if they come home with a brightly colored bow tied to their collar and their nails painted.  Casey was like that.  When she walked in the door after a trip to the salon, her rear end was wiggling a mile a minute.  If a human shook their butt like that they’d throw their hip out of place.  Sadie, on the other hand, never really got caught up in the “I’m the prettiest dog in the world” euphoria. 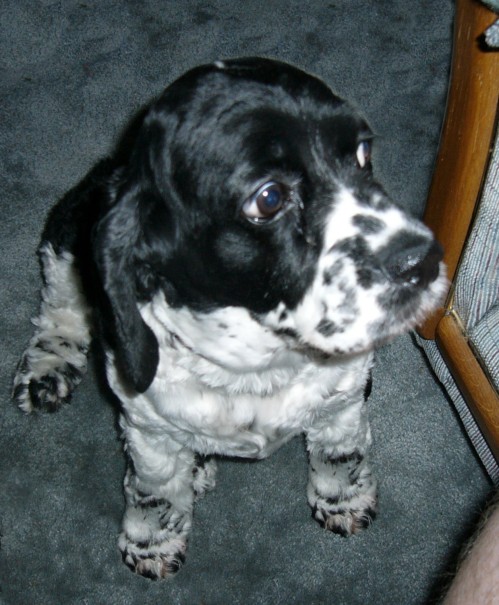 Sadie on a “good hair” day

When she was young, she’d grudgingly go to the groomer and for a short time she’d put up with the indignity of wearing a bow.  A short time is defined as however long it took her to find a projection somewhere in the house that would catch the bow and rip it off of her collar.  I see Sadie as the Hope Solo of the Cocker Spaniel world.  Her prettiness is buried deep beneath her tough girl façade.  If Sadie were human, she’d be a soccer goalie who would ride her Harley to the local bar after the match to party with her mates.  She’d also probably get kicked out at midnight for picking a fight with a fan.

A few years ago Sadie stopped letting us take her to the groomer.  The big clue was when she started coming back with all of her hair cut except for an outline where the dog muzzle fit.  That’s when I decided to start cutting her hair myself.

Please understand that this wasn’t an easy exercise then and it still isn’t now.  I have no skill as a groomer and Sadie has little patience for learning curves.  Beyond that, despite the fact that she doesn’t like to be all frilly and girly, she does have some pride.  Even a dog likes to look good in public.  I think my mistake was letting her look in a full length mirror after I finished her first haircut.  The conversation went something like this:

“There, now doesn’t it feel better with that thick extra fur all gone?” I asked.

“Hmmm, I seem a little lighter than usual,” she replied.

“Well, I gave you a summertime cut.”

“Open the door to the bedroom.  I want to look in the mirror.”

“Uh, I don’t think we should do that.  The bedroom is a mess right now.”

“Open the frakin’ door or you’re going to be a mess.”

I followed as she clomped her way back the hall to the bedroom door.

“Now remember,” I said as I slowly turned the door knob.  “There’s always an adjustment period while you’re getting used to a new hair style.”

I opened the door and Sadie walked into the bedroom and over to the full length mirror.  She was seven or eight years old at that time and I’d heard her growl before, but never like this.  This was a low, guttural growl that started from deep inside and kind of exploded out through her muzzle.

“What did you do to me?” she rumbled.  “What’s this called…a southern rattail with liberty spike highlights?”

“Unique?  One of my ears is three inches longer than the other and what’s that Mohawk ridge doing on my back?  Besides that, my hair is dragging on the ground.”

“I thought Cocker Spaniels were supposed to have long hair on the bottom!”

“On the sides, genius, on the sides.  You gave me a rail down the center of my belly.  How am I supposed to take a wizz with that hanging down?”

“I’ll fix it, just give me a few minutes,” I answered with just a touch of fear in my voice.

Grudgingly, Sadie let me lead her back to the clippers.

Twenty minutes later she was looking in the mirror again and said with just a touch of sarcasm, “Oh, that’s much better.  As a plus, it answers that age old question about whether or not a dog’s spots go all the way to the skin.”

When she came home, Linda found me sitting in the center of the kitchen table with all of the chairs lying on the floor on their side.

“Why are you sitting on the kitchen table?” she asked.

“It’s the only place that I could find where Sadie couldn’t get me.”

Just then Sadie walked into the kitchen and Linda got a good look.  After a few seconds, Linda righted one of the chairs, sat it close to the table, motioned to Sadie and said, “There you go girl.  I’ll be at the other end of the house.  Let me know when you’re done with him.”

I’ve gotten better over the years.  Now when I cut, most of the fur is the proper length and, unless I’m having a bad day, I seldom trim it all the way to the skin.  She’s never actually forgotten that first time though.  To get close enough to trim her, I have to drug her with two Benadryl buried in a piece of chicken.  She still goes to look in the mirror afterwards, but since she’s completely deaf and mostly blind it’s hard for her to get close enough to me for revenge as long as I don’t move around very much for a few days.

Saturday was a normal trimming day, so I’m sitting in my chair typing while Sadie wanders around the house randomly nipping at anything that moves.  I hope she gets tired soon.  I really have to go to the bathroom.

Filed under Just Life, Why did I do that