Apparently An Opposable Thumb Isn’t All That Important

Many years ago I worked in Michigan but lived in Indiana.   My path to work took me on a two hour trip driving, for the most part, on back roads.  I did that for over a year and it was during those long rides that I came to the conclusion there were more raccoons in Michigan than there were people.

I based this epiphany partially on the road carnage that I saw, but also on the number of live raccoons that I saw in the woods lining the route I drove.  Some of them became almost like landmarks to me. 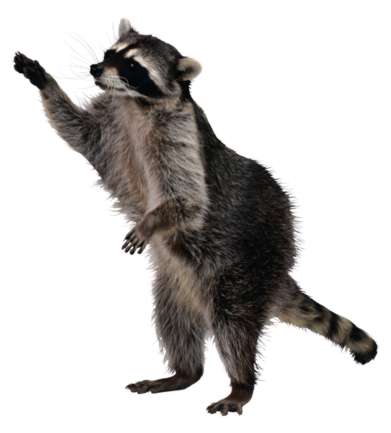 “Hi Joey!  How are the wife and kids?” I’d say as I rounded a corner and saw Joey waving to me while he stood on a downed tree near the edge of the road.

Watching for the raccoons kept me awake and vigilant as I drove to work at five AM and returned at seven PM that night.  I became attached enough to them that, when I saw one that had been hit by a car, I worried whether it was one of my buddies.  Once, I came upon one that had been hit moments before.  It must have been a glancing blow because he was dazed and lying in the center of the road on his back flailing his arms in the air.  I pulled over, put on a pair of leather work gloves, picked him up and deposited him in the bed of my pickup.  Then I detoured to an emergency vet clinic and paid to have him treated.  Raccoons heal quickly.  He was ready to be released in two days and I returned him to a spot near where I found him.  We had a long talk about looking both ways before crossing the street and he ambled off into the woods.  I know, I know…raccoons carry rabies, but they look so damn cute that I just couldn’t let him lay there and die.

My friend Tom lived in Michigan and had worked at that same company for many years.  Tom was a nature lover and in the cold Michigan winter he kept a backyard full of birdfeeders that he used to provide the avian population a steady supply of sunflower seeds, peanuts and suet.  I’m fairly sure that, at one time or another, virtually every bird in southwest Michigan has stopped by to have a meal at Tom’s place.

Unfortunately, raccoons are omnivorous and food that birds like tickles their palettes just fine.   They also are very adept at climbing, so the posts that Tom placed his feeders on weren’t much of an obstacle.  Tom would fill up the birdfeeders and, before he could make it back to the porch, the raccoons were at the feeders having a well prepared gourmet supper.  He tried the normal methods for keeping them away from the food, greasing the poles, building obstructions and installing noise makers, but Michigan raccoons are an extremely intelligent subspecies of Procyon lotor and the ones in his backyard were not to be denied.

Most people in a rural area would have resolved the problem with a small caliber rifle equipped with a night scope but, as I said, Tom was a nature lover.   His solution was kinder and gentler; he decided to relocate the raccoons.  His plan was to catch the unwanted panhandlers in box traps and transport them far away.

Late one Saturday afternoon in January, he set three traps, baited them with bird food and waited for evening and the masked bandits to come.  It didn’t take long.  By seven PM he had three very unhappy raccoons in his traps and a smile on his face.  The traps went into the bed of his pickup and he and his three charges made the trip to a forested area ten miles away.  He opened the doors, the inmates bolted free (giving him a piece of their mind as they left) and Tom returned home to a yard that had three less raccoons looking for a free meal.  Two more nights like that and the birds were eating without any impromptu dinner guests…for a while.

Less than a week later, Tom noticed that the raccoon population in his backyard was replenishing.  He pulled out the traps again and began the process all over…trap, relocate, return.  This went on for a month and Tom got more frustrated with each passing day

One evening, while eating dinner, he mused aloud, “I wonder how many raccoons I’m going to have to move?”

His wife, Laura, reminds me a lot of Linda.  By that I mean that she thinks things through in a methodical fashion and if the facts don’t fit neatly in the box, she redesigns the container.

“How do you know that they’re different raccoons?” she asked.  “Maybe the ones you move are coming back.”

“Nah, I move them ten miles.  They’re not working their way back from there,” Tom answered.

“Well because…,” Tom said before stopping to ponder. 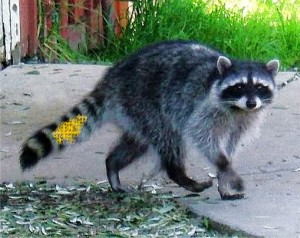 Can I pick the color next time?

“Why don’t you mark them before you move the next group and we’ll see?” Laura suggested.

Tom wrinkled his face for a few seconds and then pushed away from the table.  As he put his coat on Laura asked, “Where are you going?”

“To Walmart to get some spray paint,” he replied as he headed for the door.

The next nine raccoons Tom trapped were treated to a dab of paint on their tail.   Each one got a different color and all were transported, three at a time, to the same spot.  Within a week, nine raccoons were back and each of them had a colored tail.

Tom tried again.  This time he took them twenty miles away.  It took ten days, but each of them returned.  He tried one last time, this time taking them nearly thirty miles.  Two weeks later they were back.  By now, the worst of winter was nearly over and bird feeding season was ending.  Tom ceased his efforts at relocation.  He hoped that, by the time winter rolled around again, the raccoon clan would have moved on.  It didn’t exactly work out that way.  When he counted them in December, the population of nine raccoons had ballooned to twenty and a few of them still had telltale signs of paint on their tails.

After trying several other high tech raccoon deterrents, none of which worked, Tom’s final solution was simplicity in itself.  He built a two tier feeding system.  The lower one, for the raccoons, was a few feet off of the ground.  Eight feet higher up was a second feeding station for the birds.  He built a lift system into the higher feeders so that he could raise and lower them as needed for restocking.  He was finally successful.  Why should a raccoon go to the trouble of climbing up a pole for food when there was a ready supply less than three feet off of the ground?

As far as I know, Tom is still feeding both the birds and the raccoons each winter, so I guess the moral to the story is that, to be successful, persistence is just as important as wit.  Alternately maybe the moral is that, if you’re going to relocate raccoons, make sure that you cross a couple of rivers on the way to their new home.