Me and Robby Forever!

I’ve mentioned Robby, my little Ranger pickup truck more than once one these pages. Robby’s been my trusty sidekick for sixteen years and in all that time he’s never let me down. There have been a couple times when he had a problem and we had to limp home, but he’s never left me walking. Robby had a tough time this week, but he still has a perfect record.

This is my buddy Robby. Not bad for being sixteen. (That’s like 60 in people years)

I was making a little side trip to Charlotte this week and on the way back I hit a pothole. It was a little pothole, hardly much more than a slight bump. But, right after I hit it, I heard a grinding sound coming from Robby’s rear brakes. It turned out it was just a rusted spring that had broken and pieces had gotten caught between the drum and the pad. But, if you’re checking the brakes you need to be thorough, so all four wheels came off and got a good inspection.

I actually do that twice a year and I knew from my last look that it was getting close to time for new brakes. Robby has 185,000 miles on his odometer and he was still running on the original pads, drums and rotors, so I didn’t feel bad about doing the needed maintenance. Three hours and a few hundred dollars later Robby’s brakes worked just like new (actually, nearly all of the brake components actually were new).

His other bad experience this week was that some jerk put a two foot crease in his side while he was parked. Based on the distance off of the ground it was probably someone driving a heavy duty pickup truck or huge SUV. If it was a truck, the odds are it was one of those morons who drive an F350 with dual wheels so they can look impressive, but never actually haul anything more than a handful of two by fours. The only consolation is that they got a mark too.

Robby’s actually had quite a bit of work over the last couple of years. I rebuilt his front end, gave him a major tune-up and now new brakes all the way around.   I gave cursory consideration to trading him in on a new truck awhile back. The stumbling block was that they don’t sell new Ranger pickups in North America anymore. They still make them in South Africa, Argentina and Thailand, but they won’t sell them here. My friends in Australia can buy one, that’s where they were actually designed. My dear friend V in Ireland can buy one. Ford UK is selling them like hotcakes. My readers in the Middle East, Africa, Southeast Asia and South America can all buy a new Ranger, but I can’t. 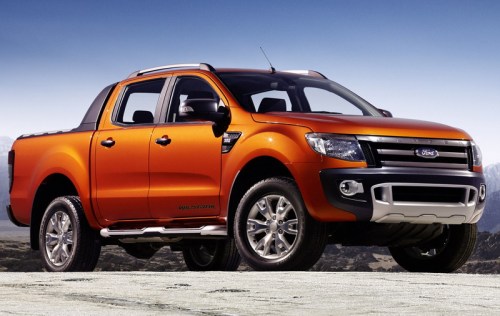 This is the new Ranger pickup. 4.7 billion people in the world can buy one of these, but I can’t.

That sucks and here’s why. My aging knees like to do a horizontal slide into a vehicle. They don’t like to climb up into an F150, especially since they make them so huge now, and they don’t like to lower down into a car. Robby’s seats are exactly ass high, so sliding in is easy. You’d think someone at Ford would understand that concept. The sales and marketing people can’t all be twenty-eight years old wunderkinds.

The other reason I like a smaller truck is for the gas mileage. Even Ford’s F150 with the Ecoboost engines is harder on gas than Robby. It might be different if I needed a pickup for regular hauling, but I don’t. About the most that Robby ever hauls is a dozen two by fours or a few bags of mulch. That’s true for most people who have a pickup, so I’m not sure why guys gravitate towards larger trucks. It sure seems like a waste of money to me.  I understand it a bit with young guys; they’re trying to impress girls.  It’s the older guys who do it that confuse me.  They should know better.

But, it’s probably all for the better. Robby and I have been together for too long to go our separate ways now. Mechanically he’s almost brand new. It’s kind of like me having new knees, new shoulders and a few angioplasties. Oh wait, I’ve had most of that done. I guess that means that Robby and I are a matched set.

About all he needs now is a little cosmetic work. I think I’m going to get him a new paint job…black again, but this time he needs Carolina Panther teal color highlights. Then he needs some new seats and new carpet.   Maybe I’ll add running boards and a tonneau cover too.  A nice new stereo with HD radio and built in navigation would complete the package. Who needs a new truck when you already have one like Robby?

Hmmm, if Robby is going to get all spruced up maybe I should look at making some improvements.

“Linda, how much do you think liposuction, a facelift and a hair transplant would cost?”

“Are you saying that you think I need some work?”

Crap, when am I going to learn to keep my mouth shut? I gotta go folks. I have a feeling that it’s going to be a long evening.

9 responses to “Me and Robby Forever!”