I love the shade that the giant oak trees in our back yard give us in the summer and the pear tree in our front yard is a nice barrier to the sound of the cars passing our house in the evening. I just wish there was some way to convince a tree that shedding a perfectly good leaf in the fall is a waste of time and energy. After all, if a tree goes to the trouble of growing leaves, why should it throw them away a few months later just because the temperature start to drop a little. It seems to me that there’d be some insulation value to keeping them. Pine trees and bushes have that figured out, why can’t oak trees?

At least I have company when I’m doing the leaves. Everyone in the neighborhood has trees so we all have the same chores in the fall. Many of my neighbors take those efforts to a higher level though. I’m one of the few who doesn’t spread new pine straw around the base of the trees or meticulously over seed the lawn so that the grass grows green and thick in the spring. I also don’t spend much time fertilizing or putting herbicides on the lawn to kill the weeds. I have a unique philosophy when it comes to my lawn…if it’s green let it grow.

Not everyone shares that thought with me. Most folks like to have a yard that is lush, soft and devoid of flora parasites like crab grass, dandelions and clover. They revel in the thought of having a yard covered with unblemished fescue that lies like a thick, green carpet around their home. I can’t find in in myself to embrace that philosophy.

To achieve that nirvana of lawns, those folks spend hundreds of dollars and untold hours manicuring, feeding, pampering, cajoling and praying over their grass. Then, just when it looks like they’ve achieved landscape perfection, Mother Nature comes around and says, “Not this year you don’t.” Then she unleashes a drought, a plague of grubs or one of the thousands of other weapons she can use to knock a pampered lawn to its knees.

My yard, which consists of equal parts fescue, crab grass, dandelions, clover, moss and the occasional green grass snake, laughs at Mother Nature’s efforts to impede its growth. In the oppressive heat of August, while my neighbors are pumping thousands of gallons of water on their coddled lawns in a desperate attempt to keep them alive, I casually open my garage door, start up my mower and give the crab grass and clover in my yard a quick haircut. Even my fescue stays green longer than theirs does. That’s because it has grown strong through its constant battle with the weeds for living space. Survival of the fittest isn’t just for animals. When the day comes that the world experiences the landscape equivalent of a zombie apocalypse, whose lawn do you think will survive?

Fortunately, I have great neighbors who embrace the philosophy that every yard has its place. They don’t harangue me about my utilitarian yard or the fact that I keep what might be considered a group home for wayward plants. They water their grass, pull the weeds and wave as I jump after stepping on a Canada Thistle in my bare feet while I’m walking to the mailbox. They may be purists, but they aren’t snobs.

I wasn’t always that lucky.  Linda and I used to live in another state. One of our neighbors there, I’ll call him Ray, was a lawn elitist who thought that anyone whose lawn wasn’t pristine was an intolerable sub-human and that they should be exiled to Coventry for their crimes. We sparred often over our lawns. He would send me anonymous letters complaining about the clover in my yard and I would respond by posting signs on my fence that said something like, “Abandon all hope ye fescue who enters here.” He never seemed to appreciate the humor.

Once, he took it upon himself to spread a three foot swath of herbicide on my side of the fence that separated our property. It only took a few days for the chemicals to create a brown strip of dead and dying clover and crabgrass. I took that as a declaration of war.

It was obvious that Ray had interpreted my casual acceptance of his complaints and my failure to respond in kind as a weakness on my part. What he didn’t understand was that, until the pesticide attack, he simply hadn’t tripped my trigger yet. That was a fatal mistake on his part. I’m a patient man, so I waited two weeks, long enough to lull him into an unwarranted sense of self-security.

Just after midnight, I eased out of my back door and stayed low to the ground as I carefully made my way to the fence. It wasn’t a high fence, so slipping over the top and dropping into Ray’s yard was easy, even with the burlap bag and small trowel I was carrying.   I wasn’t worried about being seen; the navy blue jumpsuit I was wearing and the black grease paint on my face made me virtually invisible in the dark, moonless night.

Ten feet into his yard, I made my first stop. I dug a small hole in the ground and dropped in a few seeds.   I looked around furtively. When I was sure that I still hadn’t been seen, I crawled a few feet and sowed a few more seeds. Slowly over the next thirty minutes I covered his entire lawn and then worked my way back to and inside our house. After changing my clothes, I poured a brandy, slipped into my recliner and smiled as I reflected on the night.

The first crop, dandelions, grew quickly. The milkweeds took a bit longer to mature. The clover, that took almost a year to surface. Ray never actually confronted me about the retaliation, but the anonymous letters stopped and the grass, clover and other broadleaf plants in my lawn soon repopulated the barren strip by the fence. Eventually he moved away and the neighbors who took his place were less concerned about whether an occasional dandelion cropped up in their lawn or anyone else’s. That was good.

I’m glad those days are over, lawn wars are a messy game…the only real way to win one is not to play. Besides, I’m getting a little too old to crawl around in a dark jump suit after midnight and I’m not sure whether I could crawl over a fence anymore, even if it was a low one. Yep, lawn wars are for the young. 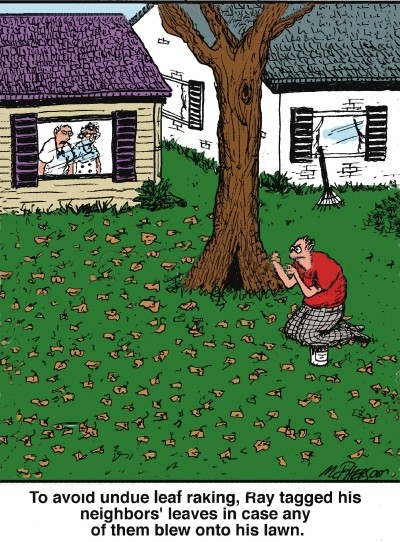