Every Grandpa Should Have a Train

It’s been decades since anyone used my name and the description “spring chicken” in the same sentence. The truth is, if I actually was a chicken and a farmer strolled by looking for a likely candidate for supper, he’d shake his head and say, “Nope, that one is too old and too tough to digest.”

Despite that, human beings have a natural tendency to lop about twenty years off their age when they conjure up a mental image of themselves. I know that I do that. Well, I did until I ran smack into reality last weekend, when my grandson, Cruz, spent a three day weekend at our house. There’s a reason why parents have children when they’re in their twenties and thirties. Not too long after that age, people start a long slow entropic slide that culminates in the phrase, “Slow down a little son, Papa Jerry can’t quite keep up.”

Despite that, there is something energizing about spending time with your grandchildren. Maybe it’s because they radiate so much excess energy that some of it is absorbed by anyone standing close by in a natural tendency towards equilibrium. I just wish there was some way to make the transfer faster.

The good thing is that, in and amongst the throttle wide open runs from one activity to the next, Cruz took pity on his grandmother and me and occasionally played something with us that we could do sitting down. Trains…trains are good. It takes a little time to get them set up, but once you do the train runs away from you and then returns without the need to chase after it.   Battery powered cars are good too. Cruz sat fifteen feet away and it took an hour of racing two cars back and forth between us before I was able to statistically prove to him that the orange car was always going to win.

The Holy Grail is, of course, a movie. We went to see Big Hero Six, a movie that I highly recommend to all ages. Kids will enjoy the action and the animation, but there was a plot and a message there that adults will appreciate too. Kids have better movies now than I had when I was their age.

“So what would you like to do today?” Linda asked.

“I dunno. What can we play with?” Cruz answered.

“Well, we have a lot of toys, but I was thinking about going to the store to get a couple of new ones. Would that be OK?”

“Sure, but we have to be careful.”

“Well, we have to be careful that you don’t spoil me.”

“Why? What happens if I spoil you?”

“Well, if you do that, your heart will turn black. You don’t want to have a black heart.”

Now, he swears that he came up with that concept by himself with no prompting from mommy. I guess I have to take his word on that since the rest of the weekend was filled with other chuckle worthy comments.

On Friday evening, I suggested that we build a tent with kitchen chairs and blankets and sleep out in the living room. Cruz thought that was a great idea. Bedtime came, we built the tent, set up the sleeping bags and went to sleep…for a while. About 3 AM Linda was awakened by Cruz tugging on the bedspread in our bedroom. 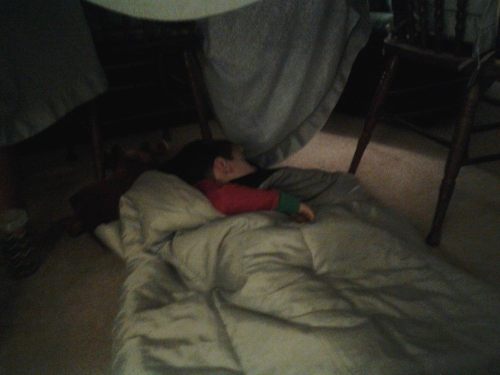 He goes to sleep way easier than I do!

“What do you want, Cruz?” Linda answered sleepily.

“Can I sleep in your bed with you?”

“Uh, OK, but what’s wrong with the tent in the living room?”

“Nothing’s wrong with the tent. But Papa Jerry’s is sleeping with his mouth open an’ he won’t stop snoring. He snores real loud.”

Saturday morning had its moments too. We woke up early and ate breakfast. Just as a cautionary tip, when feeding a five year old boy breakfast, putting too much sugar on his Dinosaur Eggs Oatmeal is a really bad idea. It takes a long time for that stuff to wear off. After breakfast, we reassembled the train and spent a good hour moving a variety of small items from one side of the coffee table to the other. Somewhere during the middle of that hour, Cruz looked at me and said, “Papa Jerry, did you know that your hair is standing straight up?”

“Yep, that’s because I haven’t had my shower yet.”

“Did you know that when your hair is standing straight up like that I can see the skin on the top of your head?”

“Yep, that’s because I don’t have enough hairs left to cover the skin unless each hair is in exactly the right spot.”

“Well Papa Jerry, you should glue all the hairs just where they’re supposed to be.”

“Some people do that. They call it ‘wearing a wig’.”

“You should get one.”

There were many more Cruzisms over the weekend, but all of them fell into the category of telling it just the way he saw it. It’s too bad that, as they get older, children have to learn to tell little white lies to keep from hurting people’s feelings. If they never learned to tell the little white lies, it might keep them from learning to tell the big black ones. 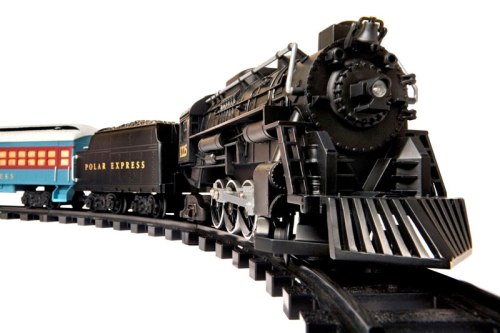 Now, if you’ll excuse me, I’m going to get the train out of the box and put it together. I’d forgotten just how addicting it is to watch a train go around the track and I really like to lie down next to the track and watch the train head straight at me.  It reminds me of running across the train trestle on the way to the local swimming hole when I was teenager.  Never pass up an opportunity to relive part of your youth.

2 responses to “Every Grandpa Should Have a Train”