“I want to buy a Cuisinart CYM-100 yogurt maker,” I said as I surfed my way around Amazon. 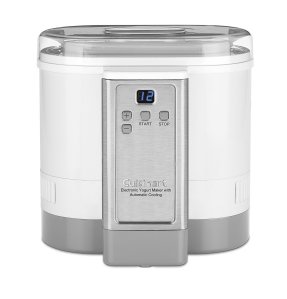 “No,” Linda answered without looking up from her book.

Before I go any further, it’s important that I explain the give and take dynamics that Linda and I have concerning economics in our home.  She gives; I take.

It’s pretty much always been that way.  Well, except for that short period of time thirty years ago when I questioned the efficiency of her financial filing system, which consists of a shoe box with a series of unlabeled envelopes and a tally maintained on a piece of notebook paper.  After a rather animated discussion lasting forty-five minutes, she deposited her entire record keeping system on my lap and walked away.  I spent a week developing a proper system with file folders and an accounting ledger, then I gave it back.  Two days later she had a new shoe box and I gave up.

So, back to the discussion at hand.

“Why can’t I have a yogurt maker?” I replied.

“Why do you need a yogurt maker?  We have fifteen markets within ten minutes of our house that sell yogurt,” she answered.

“That’s easy.  If I make it myself, it’s more convenient, more economical, I maintain better quality control and I have more creative control of the flavors.”

Linda answered with an impressive eye roll and said, “Oh really, this from a person who spends his time at work successfully justifying purchases of million dollar machines.  Let’s dissect your proposal for a yogurt maker.  How is it more convenient?”

“I don’t have to go to the store.  I can make my yogurt in the comfort of my home.”

“And the process is?”

“You heat the milk to 180 degrees, let it cool to 110 degrees, ferment it in the yogurt maker for 6-8 hours, chill it and then add the fruit.  It’s really a simple process.”

“That my rough calculations show takes about twelve hours.  How long does it take you to run to the store?”

“That’s not a fair comparison.”

“OK, let’s move on to economics.  How much does a container of yogurt cost at the market?”

“Fine, let’s run the numbers on home made yogurt,” Linda answered as she scribbled on the back of a magazine cover.  “If I add the cost of milk, starter mix, fruit and electricity, I get a total cost of $9.75 to make a 50 ounce batch of yogurt, which works out to 19.75 cents per ounce.  Two down, two to go.  Give me your thoughts on quality control.

“Well, yogurt is made in large factories.  How clean could that be?”

“You have a point, especially since you and I always wear hair nets and gloves when we work in the kitchen and since we have a dog and a cat constantly patrolling the house cleaning up stray contamination.  Three down, one to go…what kind of ‘creative control’ are you planning to exercise?”

“Well, the selection of commercial flavors is really limited.  I’d like to have more options.”

“Uh…hmmm…OK, snickerdoodle flavored yogurt.  That would be good!”

“And how exactly would you achieve this flavor break-through?”

“I’d have to experiment, of course.”

“So, now I get to add R&D costs into the justification.  That’ll crank the numbers up.”

I narrowed my eyes and pursed my mouth in my best, ‘you’re pissing on my parade’ look.  Then Linda started her own tour of yogurt makers on Amazon.

“It doesn’t automatically chill the yogurt, so I might have to get up at four AM to put it in the fridge.”

“Only if you start the yogurt maker at eight PM.  Didn’t you take a class in time management a few decades ago?”

“The cheap unit is all plastic.  The Cuisinart machine has a brushed stainless steel control panel.”

“With lots of pretty buttons on it, right?”

“Never mind.  I’ll just design my own yogurt maker,” I said in exasperation.

“Oh no.  We’re not going there.  Don’t you remember your ‘Automatic Burrito Maker’ fiasco?”

“That was not my fault!  If you’d have let me install the ‘soft float’ robot control option, that burrito maker would have worked just fine.”

“Said option cost $2700 and I was cleaning dried guacamole off of my kitchen walls for over a week.  No you are not going to design a yogurt maker.  This discussion is over.”

So, that’s where we left it guys and gals and now I need some help.  Linda just needs a teeny-tiny push to see it my way.  So, I’m going to put this to a vote.  Who thinks that I should get a yogurt maker?  You vote and I’ll pass the results on to Linda.  My bet is that two weeks from now I’m going to be in the yogurt business.