The Choices are Endless

While window shopping at Lowe’s Home Improvement today I stopped at the gift card display, you know, one like you can find in every supermarket and that has hundreds of cards for virtually every store on Earth. As I looked over the impressive selection, it dawned on me that you could deduce a lot of information about a person if you knew what gift cards they carried in their wallet or purse. Driving on the way home, I put a little more thought into that. Now, I know that I’ll be doing some stereotyping here, but there is some basis in fact to my observations. For example, I had a Lowe’s gift card in my wallet. If someone knew that, they could correctly come to the conclusion that I like to build things around the home and have a fondness for tools…powered or not. That’s not an immense amount of information, but it’s a start. I wonder what you can tell about other folks from the gift cards that they have in their pocket. 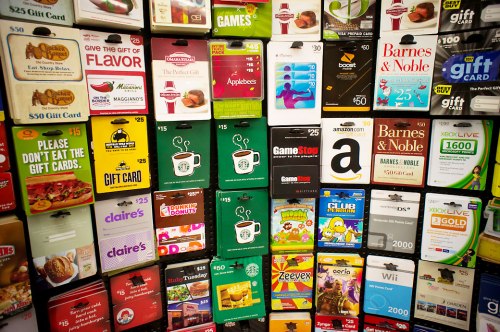 Best Buy – This person is probably a male under the age of seventy who has someone in his life who understands the axiom that, when buying a gift for a guy, electricity is good and fabric is bad.

Dunkin’ Donuts – This person can be of either gender, but they probably have a couple of extra pounds that they are trying to shed. They also probably have at least one other friend in the same condition. This friend is less concerned with losing weight and wants to make sure that their morning donut partner doesn’t get too carried away with the diet thing.

Starbucks – This person again is in their twenties or early thirties. They are much more comfortable staying up until 4 AM than getting up at 5 AM, hence the need for high powered caffeine. Soon they will learn that a good caffeine fix can be had with either Folger’s brewed at home or Mt. Dew bought at a convenience store, both for much less money than a Caffe Americano.

Victoria’s Secret – This is a female. She’s probably younger than sixty and has a significant other with big plans for Valentine’s Day. The odds say it’s probably not going to work out exactly the way he thinks it will, even if they do see Fifty Shades of Grey.

Home Depot/Lowes – This is probably a guy that you should get to know well. He will fix your plumbing at 10 PM for free, help build a new deck, figure out what’s wrong with your TV reception and be a key ally in the event that civilization ever completely collapses. He’ll be easy to find if it does because his house will be the only one that still has electricity and running water.

Abercrombie & Fitch/Hollister – This is a younger person whose mom bought clothes at JC Penney or Sears. They were always embarrassed because their jeans didn’t have a designer label. Soon they will learn that most jeans fit the same and saving money for retirement is important. Then they will shop at JC Penney like their mom.

JC Penney – This is a person who prefers function and value over being trendy. They also know that JC Penney whitey-tighties are the only ones that fit correctly.

Amazon – This is a progressive person who isn’t into window shopping. They like to have a great selection to choose from and to get in and out of the store with minimal effort without missing the latest episode of Green Arrow or Scandal.

Barnes & Noble – This is a very discerning person who always read three grade levels up in school, has more books on their shelves than DVDs and understands that, as useful as e-readers and tablets are, there is still something special about holding a book in your hand while you are reading it.

Bass Pro Shop – This is a person who is comfortable in the outdoors. Putting food on the table and defending themselves has always come easily. In the event of a zombie apocalypse, seek out this person early on and listen carefully to what they say.

iTunes – This is a person who has an iphone, an ipad and listens to MP3 music rather than CDs or…gasp…vinyl. They probably keep all of their music in the “cloud” and if the internet ever goes down permanently they’ll never hear another song.

Buffalo Wild Wings – This is a person who likes their food in a variety of flavors that come in oddly similar forms. They like sports and seldom burden their minds with questions like, “I wonder what they do with the rest of the chicken?”

Regal Entertainment – This person is very discerning. They understand that film entertainment is second only to books from a cultural perspective and that immersing yourself in a movie while seated in a theatre beats the crap out of watching one on your iPhone.

Cracker Barrel – This is a person who grew up on good old-fashioned home cooking, likes old time candy in a paper bag, enjoys watching The Beverly Hillbillies and Andy Griffith reruns on TV and really doesn’t care how much saturated fat there is in home-style gravy.

Target – This is a person who is security and identification fraud savvy. They had to get new debit cards last year when Target got hacked and they haven’t quite gotten over that. They’re going to use a gift card when shopping at Target for a long, long time.

Petsmart – This is a person who knows that, if you want a friend who is loyal, loving, full of fun, willing to go on a road trip at a moment’s notice, isn’t picky about what restaurant you visit or what clothes you are wearing and would gladly offer up their life to protect you, you should get a dog. The alternative is to become friends with a red-haired, pudgy engineer.

I came up with many more examples, but you get my point. It’s a little frightening though. If I can tell that much about you from what gift card you’re carrying, how much does Google know about you?