I Survived a Mexican Wedding

So, what’s a guy to do after becoming the world’s next great dancer?  Why he flies to Mexico with his wife to attend his daughter’s wedding of course.  Well, that’s what he eventually does, but first we had to make the travel arrangements.  I usually take care of travel arrangements myself, but I draw the line when the travel includes crossing an international border.  So, this time we went to a local travel agency.

After telling the receptionist what we needed, we sat down with a pleasant young travel agent who was eager to help.  I’m sure the commission had something to do with her excitement.  After giving her all the pertinent information—dates, location of the wedding, etc.—she asked, “Will you be staying at the resort where your daughter is being married?”

The agent logged on to a travel site and busily tapped away at her keyboard for a minute.  Then she got an odd look on her face, turned to Linda and me and said, “Are you sure that’s where you want to stay?”

“Why?” I asked as the hairs on the back of my neck started to shudder.

“Well, that ‘facility’ is on Cozumel, which is fine except it has two stars and is rated fifty-eight out of fifty-eight of the resorts on Cozumel.  My notes say that the air conditioning seldom works and they had a problem with bedbugs last year.  Plus, getting from Cozumel to the five star resort where the wedding is taking place will take well over an hour.”

“So if you were going to the wedding, where would you stay if you weren’t staying at the same place your daughter was?”

“I’d stay here,” she said pointing to a web page on her computer screen.  “It’s ten minutes away and it’s a four star resort at a reasonable price.”

“Fine, let’s do that,” I said.  Then we watched as she expertly made the arrangements for the flights and the stay.

The flight to Mexico was uneventful and we made it to our resort with no issues.  That night we had a great dinner with Kristin, Anthony, his parents and the wedding party at Kristin’s resort.  Then, we returned to our place for the night.

The wedding was scheduled for noon the next day and we arrived about two hours before.  I wandered around a bit while Linda and the bride’s maids feverishly worked to get Kristin ready.  At about 11:15 I went back to the room and arrived just as Linda and the others were leaving to go to the beach side chapel where the wedding would take place.  I stayed behind.  The plan was for Kristin and me to ride together in a golf cart to the chapel so that I could walk her down the aisle and give her hand to Anthony.  The golf cart was scheduled to arrive at 11:30.

Before I go any further, we have to discuss the difference between Mexico time and real world time.  Real world time is absolute.  11:30 AM means thirty minutes past the hour of eleven in the morning.  Mexico time is more fluid.  In Mexico, 11:30 AM is a general suggestion that sometime in the late morning something may or may not happen.  It’s a cultural thing.

At 11:55 Kristin was standing at the window, fuming while she looked at the chapel in the distance.  Suddenly there was a knock.  She turned and, like an angry lioness, leapt to the door, claws out ready to slice to ribbons the fool who had made her wait.  She grabbed the door knob, ripped open the door and found herself staring into the lens of a shoulder mounted video camera.  Did I mention that one of the options she got was a professionally produced video of the wedding?

Have you ever seen the girl’s t-shirt that says “Sweet to Witch in 0.2 seconds?”  Apparently it’s possible to go the other way too.  By the time the camera man had her in focus, Kristin’s head had tilted ever so slightly to the left and her face had an angelic smile.  To this day, I firmly believe that video camera saved his life.

The golf cart ride and the walk down the aisle went fine and the wedding ceremony itself was beautiful.  Being a mom, Linda cried of course.  I doubt Kristin saw it, but my eyes were a little moist too.  How could they not be?   My little girl was leaving us behind forever as she started her new life.  Unfortunately, the ceremony didn’t end exactly as planned; there was one more little hitch.

Kristin had planned songs for various parts of the ceremony and the resort had supplied a very good DJ to play them at the proper times.  There were six or seven songs in the play list and he hit the timing cues on each one perfectly.  The last song, which was to be played while she and Anthony walked out of the chapel, was the George Strait song, “I Cross My Heart.”  It was the perfect song to end the wedding ceremony.

Kristin and Anthony turned, smiled, stepped down from the raised platform and started to walk out of the chapel.  The little Mexican DJ smiled and cued the last song.  Unfortunately he played the wrong track on the CD.  The song we heard as my daughter and her new husband walked out was, “When Did You Stop Loving Me?”  I dropped my gaze to the floor and found myself wondering whether I had enough Mexican Pesos with me to post bail for Kristin.

Against my better instincts, I looked up and glanced at Kristin’s face.  For a split second I saw the fire in her eyes and I prepared for the volcanic eruption.  Then her eyes closed for a moment.  When they opened, I saw a quiet look of acceptance and her smile returned.  I glanced toward the little Mexican DJ and saw him smiling from ear to ear.  Apparently he didn’t speak English and didn’t understand the lyrics.  I wonder if he ever found out how close he came to death.

We spent the rest of the afternoon lounging by the beach and the next day we headed home, leaving the kids to enjoy their honeymoon.  Two weeks later we were in South Carolina for the reception. 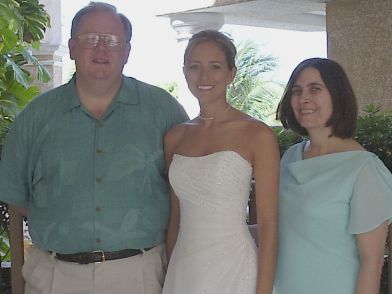 It was a great reception.  They had it in an outside area at a small restaurant that catered to receptions and they brought in a couple of tons of play sand to make the dance area look like a beach.  I wore my Hawaiian shirt and Dockers and Kristin wore her wedding dress.  I was nervous the entire day and, while Kristin and Linda were enjoying themselves in the afternoon, I spent my time practicing dancing in our motel room.

Finally, evening and the reception came.  The food was good, the cake was beautiful and the company was great.  We ate, we mingled and we had fun.  Then it was time.  I’m embarrassed to admit it, but I’ve forgotten what song played as we danced.  I suppose I was too nervous to commit it to memory.  That’s not a good excuse, but it’s the best I have.  No matter, I remember the DJ asking everyone to be quiet and asking them to join him in watching Kristin and me have our father-daughter wedding dance.

I stood up, took Kristin’s hand and led her to the dance floor.  Somehow I managed to stay calm.  Maybe the beautifully serene look she had on her face helped with that.  The music started, we assumed the waltz frame and began the dance.  The serenity faded from Kristin’s face.

“What are you doing?” she whispered.

“I’m dancing with my daughter.” I answered smiling.

“Yeah, but what kind of dance is this?” She said as she tried to follow my perfectly executed box steps and turns.

“It’s a waltz.  I thought girls were born knowing how to dance.”

“Some girls are, but I spent my time playing with footballs and frogs, remember.”

“But, I know that you go out dancing,” I said as we elegantly turned and reversed directions.

“Sure, but when I slow dance I don’t dance like this.”

“I hold on to the guy, shuffle my feet and wobble like a weeble.”

“Sally wouldn’t like that,” I said, remembering my two weeks in boot camp.

“I’ll tell you later.  We’re coming to the end of the song.  Hold on, this might get a little interesting.”

With that, I lifted my arm over her head, turned her into the sweetheart roll, flipped her out to present her to the audience and pulled her back into hold.  Kristin’s eyes went wide and I felt her hands start to tremble just a bit.

“What the heck was that?” she asked.

I smiled and did it again as we finished the dance.   Thanks Sally.